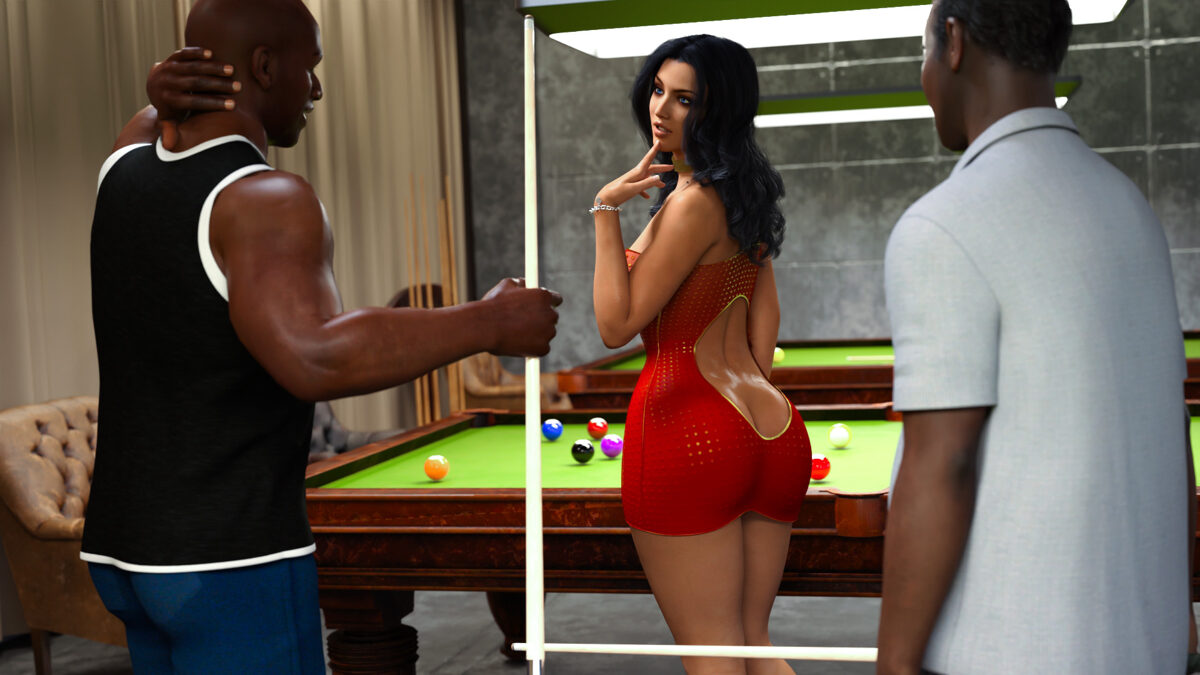 The early release of Anna's Chapter 2 v0.04: The Double Trouble is out for 15$+ patrons and you can find it here.

Most of you know that this update is mostly for the scene with Dilan and his friends. Therefore it's the longes one in this update. I think that it's one of the longest in the whole game. Nevertheless, there are also other more or less important scenes. Anyway, this update has the most animations I have added so far. I'm using help from aside and I hope that you will like them.

Changed:  Minor visual changes, Added more functionality to the phone, so you can see when new messages are received. Now you can also see when corruption and relationship are changing.

Still, a lot of things are planned in the future and might change both functionally and design-wise. This is a beta version, but you should be able to play through without major bugs and get all of the scenes.

Choices now will have a lot more impact and different content so you will have to play through multiple times to get to see everything. There will also be more or fewer choices depending on your previous path. You can also miss some scenes as not everything is mentioned in the journal, so read dialogues :)

Collectibles are images of Anna and other characters out of the game in different settings. They can be in different places at different times of the day. So far there are six, but more to come.

This time story is mostly revolving around the video shoot and John.

The extended video shoot scene will reveal more of Anna and lead to more stuff in the future both with our actors and new events. A scene with John, that will make you question him, but I know that a lot of you will love it. A scene with Timothy that will improve their relationship and reveal more of Timothy's past (you can miss this though). A short scene with Emily at the adult shop as well as a short scene at home with Anna's toy she got from Rebecca.

If you find any bugs, please send the info to me through discord, mail, or patreon mail.

If you want to hide the dialogue box press the middle mouse button or H.

You can find Chapter 1 here. 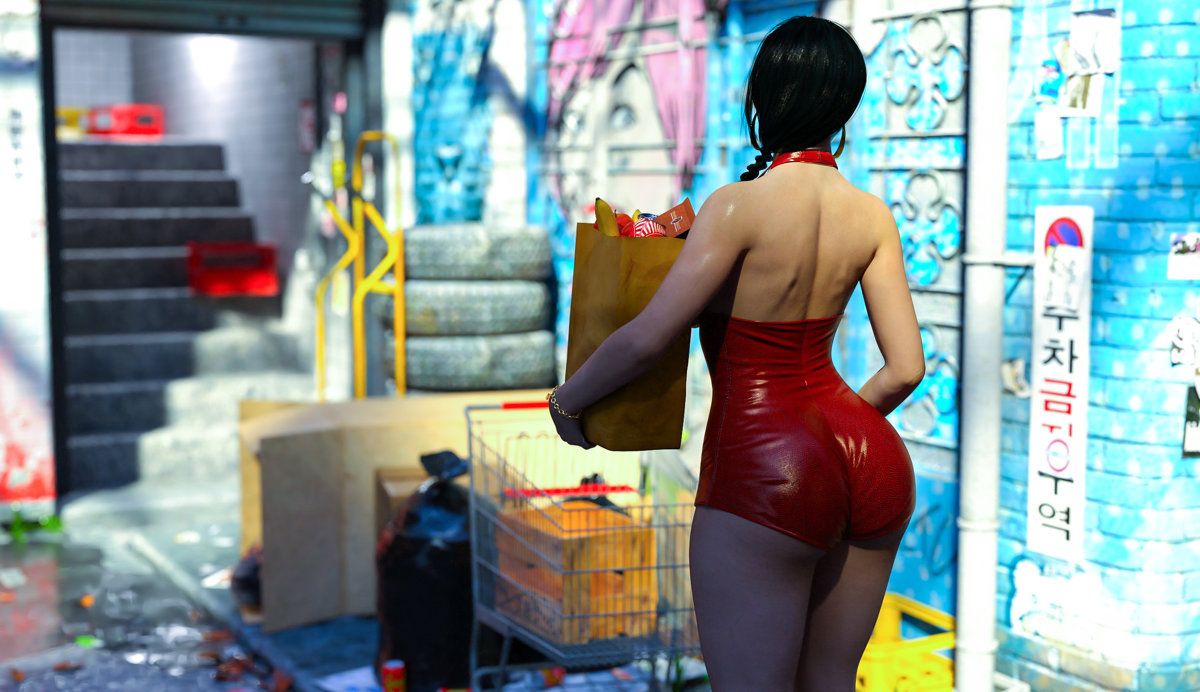 A quick update this time.

I'm still working on the update, and I'm close to finishing the last scene. I am also adding a bunch of edited renders to the image folder already. I hope to finish rendering remaining stuff in following days, then start adding scenes to RPG maker.

In the image you can see that our girl hasn't forgotten about our poor friend behind the bar :) I think that this scene came out quite beautiful and hot. Location and our hobo are very lovely to work with. Stuff from some previous scenes are also being talked in this one to tie the plot together more. Let's see how far Anna will go this time and if something more could happen there :)

I know that a lot of you are waiting for Anna to come out sooner and I'm doing my best to bring her to you in these tough times. At least for me, she's helping to take off my mind of everything that's happening.

Thank you again for your fantastic support. 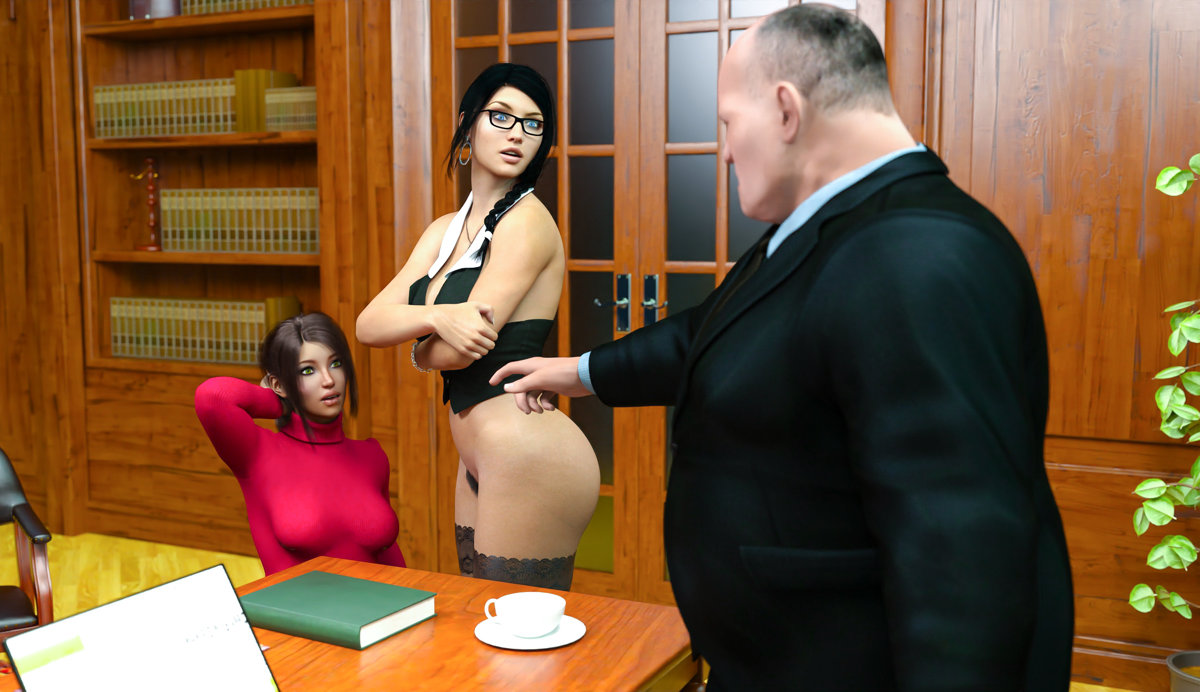 I hope that everyone is ok and sickness haven't got to you. There is an emergency in my country and everything is closed or stopped. Not much has changed in my daily routine though as I'm not in quarantine and I'm working from home anyway. Can't go to the gym though. I hope that it ends soon and everything is under control as it seems to be in China.

Anyway, I'm working on the next update as I did previously and so far nothing has gotten in my way. Some beautiful renders and interesting scenes are coming to you. At the moment I'm working on some interesting stuff that will add a little bit more action and tension to the game and it will involve Rebecca. I'm not telling too much, but you can try and guess what's going to happen :)

In the image, you can see an Office scene. Jeremy is in his element and gets what he want's but what is that? Emily is finally involved in paying back her debt. I think it's going to be a hot scene and I know that a lot of you will love it. 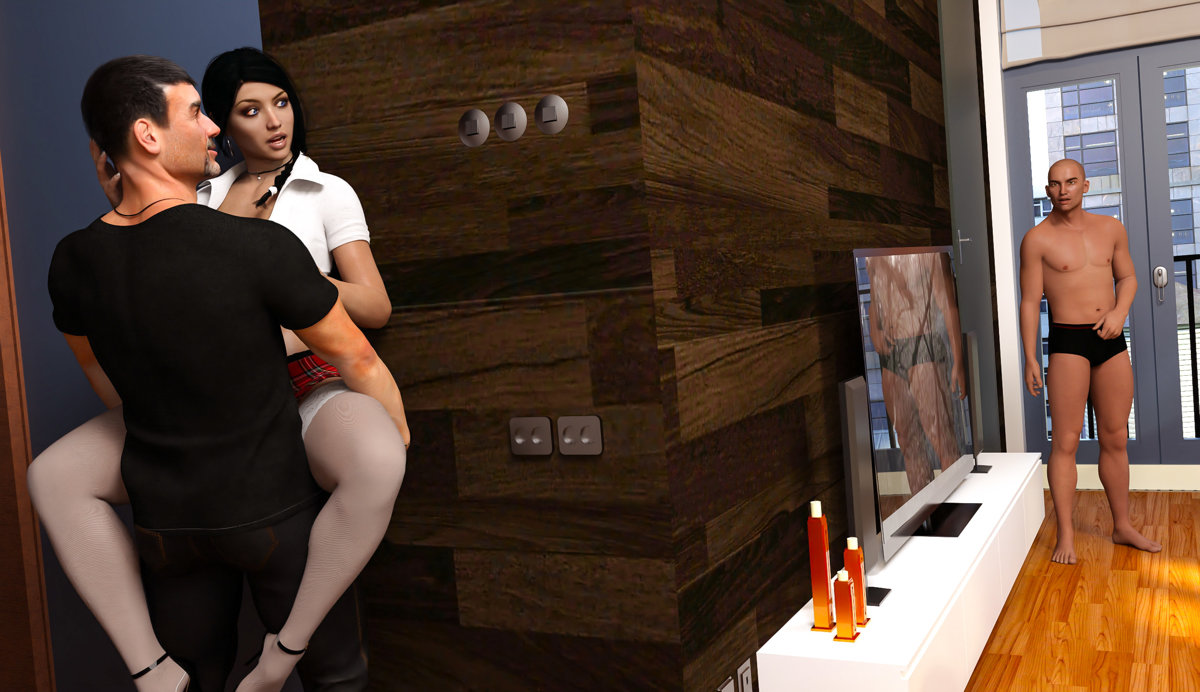 First of all, I'd like to say that work on the update is going great and I'm glad how scenes and renders are coming in. I'm starting to add edited renders to an elite folder already. As I'm trying not to tell any release dates yet, I will make a progress bar so you can see how work is moving. I know that a couple of other creators out there are doing it.

I have also updated my website so it looks a bit better now, with some beautiful renders that only some of you have seen before :) www.deepsleepgames.com Free version is also updated to version 1.4 so those who want can try it. I also added Mac, Renpy and Android ports there.

In an image, you can see another glimpse of what is going to happen in a scene with John. Anna will go to Andrew, that's for sure, but can he satisfy her and will it be enough :)

Also, this time scenes won't be too long as it was in previous updates with Alfred and at the bar, so there will be more of those.

Thank you again for your amazing support, it means a lot. 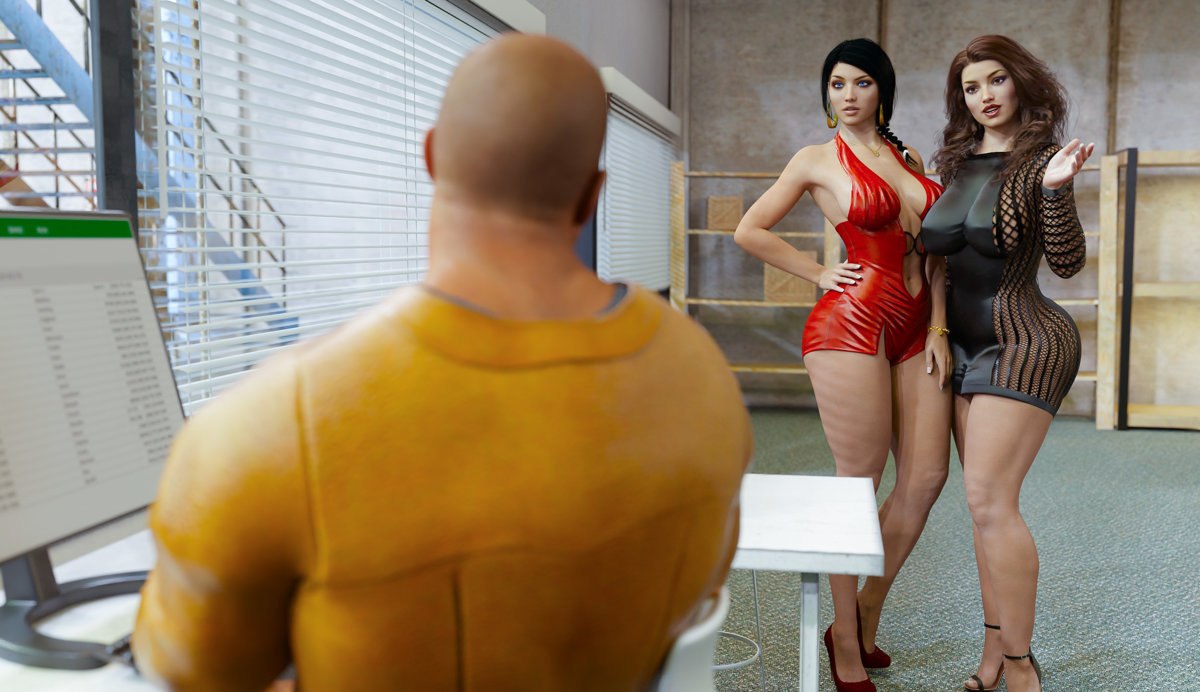 As you remember, Anna got some information from Fitzgerald. One way or another, but she got it out of him. Depends what you chose at the spa :) She could do it alone, but it's probably too dangerous, so she will go to meet Sergey, but this time, Rebecca will also come with her. It's planned after dinner event at her place. Anyway, I believe that Sergey is going to be surprised seeing them like this. What will follow, well, let's see in the next update :)

Work on the update is going well in general, so I'm happy with that. I still can't tell the exact release date, but I'm doing my best do bring it as soon as possible.

Discord is quite lively and I receive a lot of messages and that's good. I'm always open to chatting with fans of Anna. I might miss some messages, but please remind me and I'll come back to you :) 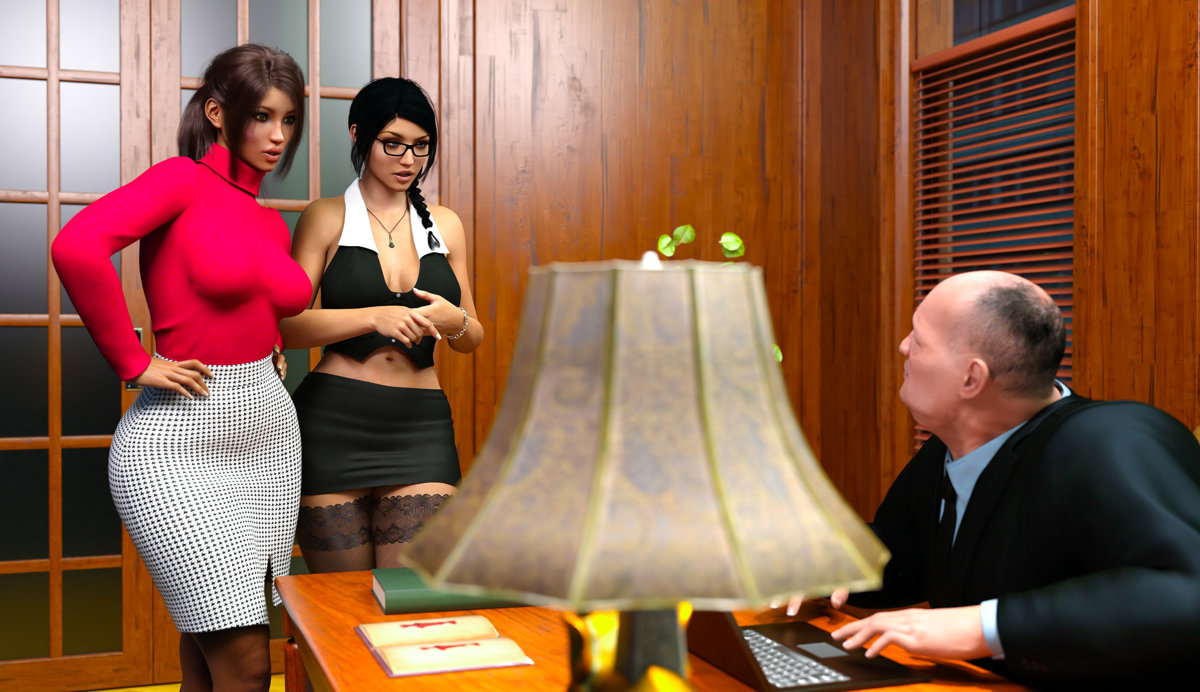 Here is another quick update on the progress of the next release. So far I have finished working on scenes for Sunday (I will start uploading edited images to image folder this week) and began to work on the Office scene. It's going to be a complex one, as mentioned previously. Something like in the bar for the previous update. I have to take into account all of the previous choices. There will be content with Emily if Jeremy is kept alive. There will also be content with Diane if Jeremy is killed. Also, there will be a scene with Ethan if Jeremy is dead.

All of those scenes will be exciting and will move plot for the Office further by a lot. I bet that some wouldn't expect how it will turn out. At least not for the dead Jeremy part :)

In the image, you can see both Emily and Anna at Jeremy's Office. I will leave to your imagination what is he going to do with them or ask them to do :)

For now, everything is going great, and there are no setbacks.